Knitting as a Political Act; Clones in a Pink Hat; A Lace Dress 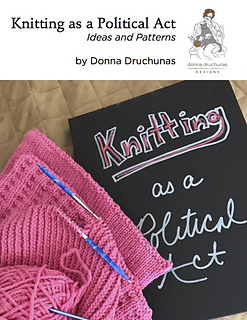 Craft as resistance: Have you downloaded Donna Druchunas’s free ‘Knitting as a Political Act’ e-book yet?

Related: this talk about the role of knitting in the era of World War One sounds fascinating. February 9th, at the Rockport Public Library in Rockport, Maine. If I lived closer, I’d definitely attend.

Just a little reminder: Jillian and I are both reaching at the upcoming Interweave Yarn Fest, in Loveland, Colorado. The weekend of March 30-April 2, the event features a broad variety of classes on all topics yarny: knitting, crochet, spinning and weaving. If you’re in the area, there’s also a great retail fair.

Not knitting, but absolutely fascinating: a lace dress, made for Queen Charlotte, the wife of England’s King George III. The dress is rare for two reasons: very few pieces of the era have survived, and this one in particular is constructed entirely of lace – a process that would have been incredibly time-consuming and costly, and resulted in a very very delicate garment. The story is worth reading, if you’ve been following the new TV series “Victoria”, as Charlotte’s sad family history ultimately led to Victoria being crowned.

YES: Craft on the cover of the New Yorker. And here’s the story behind the artist, Abigail Gray Swartz, who is also a knitter. She submitted it to the publication on a whim!

Totally blowing my own horn here, but I can’t resist.

Due to a connection through my husband’s work, I had to make two pink hats, as a day or two before the march I ended up giving my first one away. My first hat went to none other than Tatiana Maslany, Emmy-winning actress and lead in the very popular TV series Orphan Black, where she plays a series of characters. Ms. Maslany was unable to walk in the Women’s March January 21st due to work commitments, but she did post pictures of herself, in character(s), wearing the hat I made.

It was even mentioned in Entertainment Weekly. Squee!

10 thoughts on “Knitting as a Political Act; Clones in a Pink Hat; A Lace Dress”